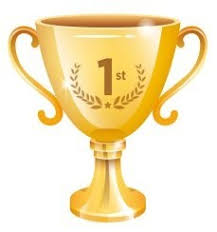 Luca Malatesti, the CEO of the CEASCRO factory, has been awarded the annual prize for scientific excellence of the Faculty of Humanities and Social Sciences at the University of Rijeka. He mostly managed to impress the judges with the several co-authored outputs of the project. Although he has expressed gratitude to the co-authors, Marko Jurjako, Zdenka Brzović, Elvio Baccarini, Filip Čeč, Predrag Šustar, Vesna Šendula Jengić, and Jelena Hodak, he has neither disclosed the value of monetary reward nor whether he will share it with them…. But we congratulate him the same.

Posted in Uncategorised | Comments Off on Follow the leader

On 7.5.2018. Marko Jurjako gave a popular talk with the title “Psychopathy: mental illness or just a deviation from social norms”. 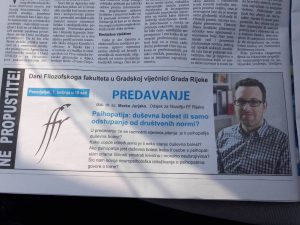 The talk was given at the Rijeka City Hall, as part of a series of lectures celebrating 20th anniversary of the Faculty of Humanities and Social Sciences in Rijeka.

Posted in Uncategorised | Comments Off on Public lecture: “Psychopathy: mental illness or just a deviation from social norms?”

Zdenka Brzović published another gem from CEASCRO factory! This time it is an encyclopaedia entry on Natural kinds.

The article entitled “Natural kinds” is published in Internet Encyclopedia of Philosophy, an open access peer reviewed encyclopedia of philosophy.

The article can be read here: https://www.iep.utm.edu/nat-kind/

Posted in Uncategorised | Comments Off on A new publication – natural kinds

Another piece by the CEASCRO dream team is out. This time we did the Italian job:

Mama we are coming home!

Posted in Uncategorised | Comments Off on New article published

We are proud to announce that another CEASCRO paper has been published. This time the lead author is Zdenka Brzović, who in a colaboration with Marko Jurjako and Predrag Šustar wrote a paper entitled “The kindness of psychopaths” published in the International studies in the philosophy of science.

Don’t be misled by the title, they are not actually (a) kind! In the paper, the authors discuss whether psychopathy should be considered a natural kind.

The paper is published open access thanks to a grant by the Croatian science foundation.

Posted in Uncategorised | Comments Off on The kindness of pychopaths

Activities of project CEASCRO are being promoted in the latest edition of the journal Panorama.

In this edition of Panorama, the chief investigator of project CEASCRO Luca Malatesti gave an interview in which he talks about the activities and goals of the project.

The interview can be read here.

Posted in Uncategorised | Comments Off on CEASCRO in media

Congratulations to Marko Jurjako for receiving the Essay prize 2017  for his paper “Normative Reasons: Response-Dependence and the Problem of Idealization“!

The prize is awarded by Philosophical Explorations: An International Journal for the Philosophy of Mind and Action. The paper will be published in the next issue of the journal.

The mother paper is out!

After giving painful birth to her children (Child 1 and Child 2) the mother paper finally took care of herself.

A new CEASCRO piece entitled “Neuropsychology and the criminal responsibility of psychopaths: Reconsidering the evidence” is now published online by Erkenntnis.

The online version can be read here.

Posted in Uncategorised | Comments Off on The mother paper is out!

The activities of the latest CEASCRO conference “Psychopathy: Scientific and Social Challenges” and the Summer School in Political Philosophy organized at the Faculty of Humanities and Social Sciences in Rijeka, were covered by the local tv station KanalRi.

The news clip can be seen here.

Posted in Uncategorised | Comments Off on CEASCRO in media